I was on tour with my dance company recently, a two and a half day journey to Brno, Czech Republic via Vienna, we had been invited to perform at some kind of centenary celebration.

After the show I made a B-line back to the hotel, ordered room service, and settled down to an evenings work, Spring/Summer is a busy time for saddles and a lot of admin work for me.

Like so many of us, I will often head on over to Youtube in-between client correspondence, writing, general research and sometimes some shopping… for Sanson of course. I settled into a stream of Youtube videos, starting with some of my favourites from Buck, to watch them again and see if I heard it with different ears, saw it with new eyes.

I came across this video in the recommended section from New Zealand show jumper Vicki Wilson.  Now, Australians are not New Zealanders and vice versa, but as fellow Antipodean’s we certainly share a number of similar characteristics.

I noticed a number of things in Vicki’s manner that I related to and a number of things I strongly admire not only in horse people, but people in general.  She had a very strong work fixation.  Vicki was full of facts, and did not hold back on any of them.  Despite vigorously riding, treating and diagnosing horses during this session, she barely drew breath and kept pumping out what she knew in a no nonsense, direct and clear manner.  It is a different mentality from perhaps the Polish or ‘well-raised’ European culture of behaviour I find myself living by.

Often I am confronted by people who tend to hold back, say nothing, disguise themselves or their thoughts and opinions, and I find that very frustrating.  Aussies and Kiwis are sort of honest to the point of blunt or rude, generally, and many well raised European’s find this shocking about me.  I like people in Vicki’s vein who can just directly address an issue.  They tell you what they are good at without false modesty, but also tell you without self-resentment what they cannot do.  She was result orientated, did not waste her time on audience pleasantries, showmanship or being pretty and beautiful, she barely looked at the audience, she was totally focused on her work.  Vicki’s chiropractic adjustments on these horses to an untrained eye, and even her riding, to someone who is perhaps obsessed with Dressage propaganda, would look rough, aggressive and potentially painful.

Make no mistake about it, Vicki knows exactly what she is doing.  She just feels no need to dress it up to protect fragile sensibilities, or egos.  A very Antipodean trait.  Made me feel like a proud ANZAC to be honest.  Her riding seat looks like a secure jumpers seat to me.  She changed leads and reins in the blink of an eye.  She was addressing 25 technical elements within 10 strides and did it clean, fast and decisively, so fast you would have to watch it in slow motion to get all the points and then could write 5 pages descriptions on 5 seconds of ride… I could anyway.  This is a FUNCTIONAL rider.  Not a FORM rider.  Something I need another blog to write about.

Her message cannot be more important.  Pain.  She focuses on physical pain affecting mental pain.  I would go one step further and say that mental pain can eventually cause physical pain.  When I got injured in my dancing, it was always something that occurred at a time when I felt bad about my work.  Then, -BOOP- an injury, like my body gave me the exit that my mind was searching for.  My mum would call is psycho-symatic.

Vicki says ‘Your horse did not wake up that morning and decide to be naughty.’

She argues that horses misbehave because they are sore, or in pain.  And it may or may not be the bit, as the first bay gelding had the same symptoms without a bridle.  Once you correct that pain, the behaviour abates.  Some pain is mental also, but I totally understand that Vicki, coming from a sport jumping background, is probably aware of this, but absolutely cannot speak that openly to her sport clients, or in a mainstream equestrian environment, people would throw her out as contrived modern psycho-babble.  But I bet if you got with her one on one, during a treatment, she would say the same.

She definitely alluded to it.  Saying ‘There is still so much memory!’  Movement memory.  Pain memory.  Long after the pathology healed the memory of it stays in the body like a ghost.  And what she does is perform a type of exorcism for that memory through not only her adjustments, but her riding but also her energy.  How can she take an incredibly sore horse, that has the potential to strike, buck and harm someone, and she just takes their whole damn leg in her hands and pulls it every which way and not get hurt?  Experience and confidence!  She doesn’t approach the horse timidly, she approaches very aware, but very decisive, and I think the horses respond in turn.  Her blood pressure and adrenaline is low and her internal monologue says only ‘I am here to help’.

This way she can put the horse through potentially dangerous positions, and the horse gives her the chance, goes out on a limb with her and trusts her.  Because her energy represents help, not harm.

I saw it last summer when I had Sanson’s teeth floated.  After asking all around the Alupjarrah’s for who is the best for teeth and barefoot trimming, I finally got the number to a bloke named Mordecai Love (Fabulous name!)  who was the brother of Dallas Love, a lady who ran another Horse Trekking centre a few valleys over.   Mordecai had spent a great deal of his horse career in the USA and apparently when it came to teeth he was a bit of a wizard.  He also trained his sisters horses with a style of western dressage and was famously fickle and hard to get a hold of, having been semi retired from his trimming and teeth gigs.

Well I called and called and called him, texted and pleaded, climbed onto the stable roof to get reception and finally Mordecai showed up one Wednesday about a week before our truck arrived for Poland.  I was expecting Sanson to be sedated, he had never been to the dentist, and can be very reactive to pain, confusion or discomfort.  Well, Mordecai stepped up with the confidence and groundedness of an experienced and confident horse person, and floated Sanson single handedly, without sedation, while absent mindedly chatting with me about what he was doing.  Having probably never been spoilt by the clean and cushy northern European horse sport scene, spending his whole life in remote Spanish mountains or hard American plains, where the horses were not pampered athletes but integrated members of work and life, he worked without confusion, sweat dripping, wide calloused hands treating my horses mouth with a delicacy that would not have crushed a rose petal, and yet somehow holding a mildly surprised, 600 kg, famously dramatic draft horse in place.  I helped of course, but eventually Sanson showed obvious signals of enjoying himself.  After he gave a huge sigh and licked and chewed for about 5 minutes.  His mouth needed some work, and will need it annually for his whole life.  But his first trip to the dentist was kind of like a curious and strange, but overwhelmingly positive experience for him.  This was due to Mordecai’s approach, which I so much prefer to some of the neurotic, over cautious cultures further north of the Med’. 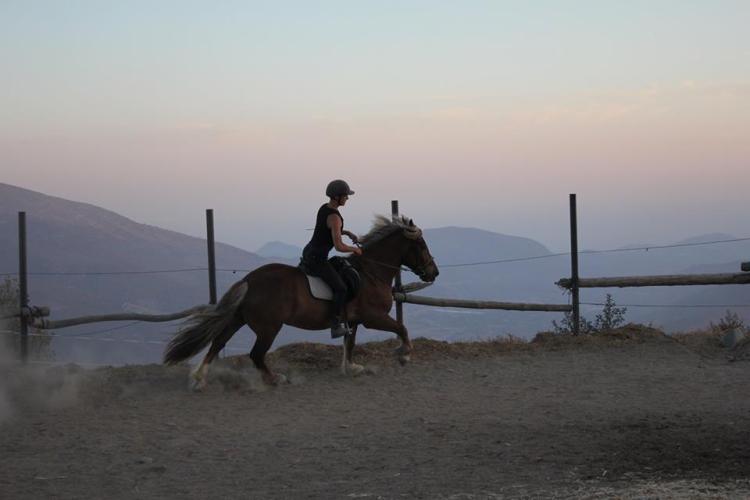 I was struck by Mordecai’s ability to do something dangerous, safely, quickly and successfully, not only because he had the right technique, but because he sort of ‘didn’t give a shit’, If you know what I mean.  He just walked up there, knew all the possibilities and just did the damn thing he was asked to do because he knew it was for the horses good.  He didn’t agonise over every glance of the eye, each nervous stamp of a hoof, he just spread his weighted and calm energy over the horse and did his job, and did it fast and well, without sedation or hesitation.

I am hunting for people like this.  People not ruled by fear, timidity or uncertainty.  Who approach life and horses with confidence and vigour, without the desire to camouflage their excellence.